This wiki is about the game of Go in New Zealand: players, tournaments, NZ's unique rule set and some history.

The New Zealand Go Society has been established for forty years and now has half a dozen active clubs in most major cities. Click here for the official NZGS website, or check out these local Go clubs: 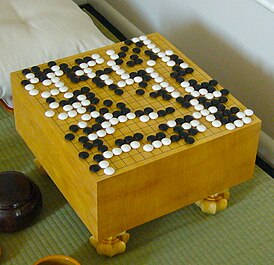 Summary of the latest New Zealand news. Please add the most recent or future news at top.

- If you see any errors in these tables, please let me know so they can be corrected. Thanks, Colin Grierson (secretary@go.org.nz).

The above link takes you to what is intended to become a history of NZGS Go News letters (the first dated Nov 2013).

This site was complementary to the New Zealand Go Society's first official non-commercial website (which regrettably suffered from vandalism) and may duplicate most of that site's material. Contributors to that site are enthusiastically urged to copy their own material to corresponding pages here. (Please use the same registration/login name if practicable.) Some of the original website was preserved on the Internet Archive.

Anyone may edit most pages of this website, and any member of the NZGS may request administrator rights.

The NZ Go Society has been offering an incentive for schools to start a go club.

2015 Wellington Open was held on November 28 and 29. Only eight participants.

2015 Auckland Championships were held on September 26 and 27. Winner Laris Du. For more details follow the link..

Players from six continents and assorted islands gathered at the Montien Riverside Hotel in Bangkok for this year’s World Amateur Go Championship June 7-10. See a list of participants here. John Chen was our representative at the WAGC this year.

My first tournament as a kyu player: How did I go in my first ever tournament - the 2015 NZ Open?.

Taiwanese professional visiting NZ for 6 months from December 2014. See Taiwan page. She was in Wellington on 5 January at one of the Wellington Go Meetups.

Minutes of the 2014 NZGS AGM and financial statements

Winner was Wellington's Chahine Koleejan with an emphatic 5-0 result. His final game with Denis Liu was particularly exciting. A complex fight developed early in the game that grew and grew. Eventually, when it looked like all groups might live Chahine made a rash looking cut. Denis tried to capture the cutting stone (he had to) but Chahine had it all read out and caught Denis's stones in a shortage of liberties - killing a large group in the process.
Second equal on 4 wins were Denis Liu, Ken Xie and Roger Li. For the full results: 2014 NZ Open

Jason Bei played in the 35th WAGC at Gyeongju in Korea in July 2014. He too won half his games, but ended a bit below half way, 30th of 54.
Macau - Lose
Ireland - Win
Serbia - Lose
Spain - Lose
Turkey - Win
Lithuania - Win
Slovenia - Win
Netherlands - Lose
Full results at http://ranka.intergofed.org/?page_id=10900

Weblogs and other news

You can replay the games at your own speed on that page.

Some time in the last few days, it seems, the old wiki seems to have been mucked up. That's very sad: it contained (apart from pages we can ignore) dozens of pages of NZ Go history and creative writi…